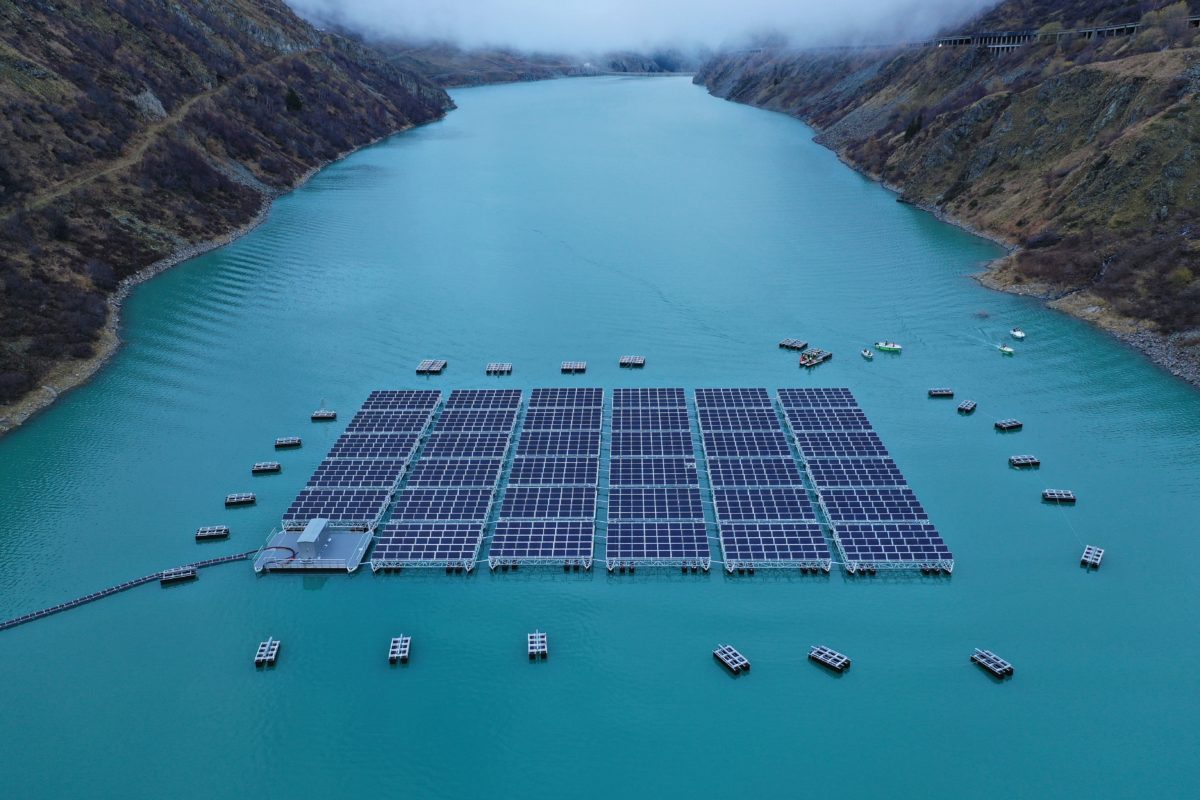 At a height of 1,810 meters, this ground-breaking solar power plant made from 2,240 m2 of solar panels will produce over 800,000 kWh per year… while waiting for an even more complete floating solar park. A technical and environmental performance, a worldwide premiere at such a high altitude.

Lac des Toules, at an altitude of 1,810 meters in the town of Bourg-Saint-Pierre, Switzerland, is the home to a worldwide premiere commissioned by Romande Energie SA: the very first large floating solar park in the Alps.

Poralu Marine was in charge of its design, engineering, construction and installation of the entire floating structure on which the solar panels were installed, beginning six years ago with the preliminary studies to validate the installation of this pioneer power plant. The plant, which is now up and running, will be used to validate the technical and financial feasibility of a larger floating solar park, which could cover 35% of the lake’s surface. This structure would have 67,000 m2 of solar panels which would be attached to a bed of approximately 1,000 floats anchored on the lake’s banks. The floats were all manufactured by Rotax, one of Poralu Marine’s subsidiaries.

Lac des Toules is an artificial lake formed by a dam. The demonstrator, linked to an electrical power plant located at the foot of the dam, already has roughly 2,240 m2 of bifacial solar panels that will produce over 800,000 kilowatt-hours (kWh) per year. This is the equivalent of the annual consumption of about 220 households.

Though used to challenging conditions, the Poralu Marine team had to consider the extreme temperatures, down to -30°C, anticipate the weight of the snow of the solar panels and assess how much hold the ice would have, without forgetting wind that blows up to 120 km/hour. This installation is designed to support 60 cm of ice on the lake and 50 cm of snow.

The floating structures are designed with an aluminum alloy, a material that supports extreme weather conditions. The floats are made from high density polyethylene. Romande Energie SA assembled the photovoltaic panels on the structures. Then everything was put onto the lake. This lightweight aluminum structure only requires a small amount of tie-down and is weighted down in the lake. The floating structure adapts itself to the lake’s level.

In the future, the floating solar power plant will produce over 22 million kWh per year, which is the equivalent of the annual consumption of over 6,000 households. That represents a yield that is up to 50% more than a park with the same dimensions on land. This can be explained by the reverberation of light on snow. As the solar panels are bifacial and transparent, light goes through them and they thus capture light reflections on both the water and snow.

Romande Energie has a dual goal with this worldwide premiere: facilitating and accelerating Switzerland’s energy revolution. As for Poralu Marine, its strategic priority is to contribute to protecting the environment by designing and installing projects that address sustainable development stakes.

Speaking of which, what impact does this project have on marine wildlife?

Lac des Toules is an artificial lake formed by a dam. As the dam is emptied every year, there is nearly no wildlife in the lake. There are just a few fish that are released for recreational fishing.